The third season of The Deep premiered on ABC ME in Australia on March 3, 2019. On February 13, 2018 The Deep was renewed for season 3 after ABC ME (an Australian Broadcasting Company channel) ordered 13 episodes of Season 3.

It consists of 13 half-hour episodes, totaling up to 52 episodes for the series. The Animated series was also released on Netflix on November 1, 2019. The first release of Season 3 came to television in March with ABC MC in Australia.

The season premiered with the episode "The Treasure" and concluded with "The Sceptre".

The Monumentals — huge creatures capable of changing the world — are waking from their long slumber! To put the giants back to sleep, Ant, Fontaine, Will and Kaiko must find the ancient city of Lemuria and harness its secret. Dangerous pirates, fantastic creatures and tantalizing mysteries will confront them along the way. But even with unexpected help from Jeffrey the Fish, they’re running out of time.[citation needed]

In an interview with Tom Taylor and Dave Richards of Comic Books Resources published in September 22, 2017, Taylor first hinted about a possibility of a 3rd season of the season, suggesting that another season is "highly likely".[1]

On January 21, 2018, Tom Taylor hinted on Twitter that there will be news about a possible announcement of a 3rd season.[2] The first news came on February 13, 2018 when DHX Media, A Stark Production, and Technicolor, announcing that Australia's ABC ME ordered an additional 13 half-hour episodes of The Deep animated series, giving Season 3 a green light; with Season 3 to premiere on Family CHRGD in Canada and with a Global release on Netflix.

On April 12, 2018, Tom Taylor announced that the script writing for the series was completed. "The Race" was also announced to be one of the titles for an episode.[3]

At Toy fair 2018 Steven Wendland from Technicolor announced a new line of toys for the show which includes action figures of the main characters, some of the creatures, stuffed animals, and a few of the vehicles including the Rover, White Knight, and Mag Knight, as well as a new vehicle called the "Red Claw" which Wendland describes as the pirates version of the Rover and is said to appear in season 3. Additionally, Jess and Bob Gorman are to be in Friends In Deep Places.

For the first time in the series's history, The Deep will be globally released worldwide via Netflix (except for Canada where Season 3 will be released on DHX-owned Family CHRGD first before going to Netflix). A release date is expected to come in 2019. On December 14, 2018, additional deals with CBBC (UK), Super RTL (Germany), VRT (Belgium), NRK (Norway), KidsZone (Estonia, Latvia, and, Lithuania), S4C (UK and Wales), SVT (Sweden), and TVP (Poland) were made to air Season 3 on those Networks in addition to the Global release on Netflix.[4] Season 3 is expected to be premiered in Australia first on March 3 on ABC ME followed by CBBC the following day on March 4.[5] In Canada, Family CHRGD aired Season 3 on March 11. In the US and other countries, Season 3 premiered on Netflix on November 1, 2019. 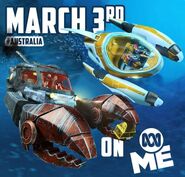 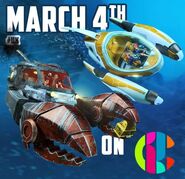 This is the Family CHRGD image of season three 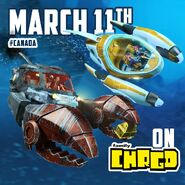 Oficial poster release of season 3 for Family CHRGD in Canada.

Community content is available under CC-BY-SA unless otherwise noted.
Advertisement